A week in Kazakhstan 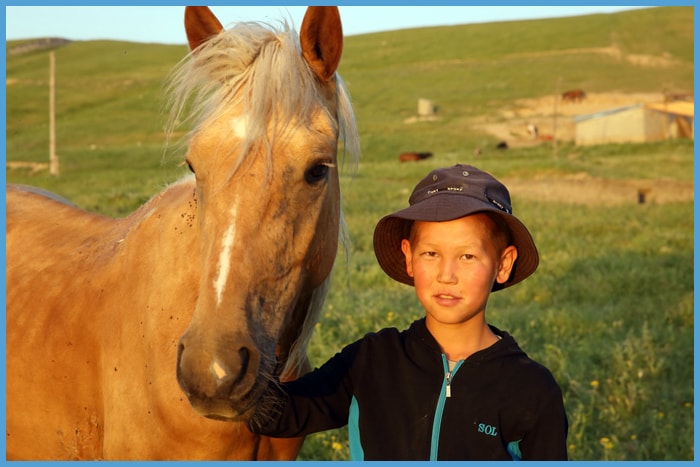 Day 1: Almaty
Arrive to Almaty International Airport, meet your guide and drive to city. You guide will take you whole day city tour. Starting point will be popular place of residents-Green Bazaar. It is colorful and busy bazaar. After bazaar, walk to central park of the city - Panfilov. It was named for the honor of Panfilov division in World War II. There are different monuments in the territory of the park. The most beautiful construction is Zenkov Cathedral of late 19th century. It is one of the magnificent wooden buildings in the world. Later after cultural part of the city, drive out to Medeo Gorge. It is well known due to highest mountain skating rink of the world. Up from the rink, there is a ski resort Shymbulak. After exploring Medeo, drive back to city and climb to Kok-Tobe Hill. It has an observation desk and many things of interest to see. On the way, take a cable car to the center of Almaty. Night in a hotel.

Day 2: Almaty - BAO - Almaty
Today is a day tour to Big Almaty Gorge. There is a beautiful Big Almaty lake located at the 2 510 meters above sea level. It lies on the plateau of Trans-Ili Alatau. The lake and surrounding is fantastic. In nice weather, you can see the reflection of mountains all round. The story of the lake goes to the movement of glaciers in ancient time. As the source of the water is glaciers and permanent snow, the summer temperature is not above 10 degrees.  Sometimes there is a limit to get the lake, because the water is used as drinking in the city. There is a way going higher from Big Almaty Lake, it goes to the place, where astronomical and space researches scientific base is located (3300m). On this place, on the foothills of Big Almaty Peak you have grandiose view to the lake and other magnificent mountains around.  After having enjoyed the city drive back to city and rest in hotel.

Day 3: Almaty - Kolsai Lakes
Depart to Kolsai Lakes, which is known as "the pearls of Northern Tien Shan". There are three lakes of Kolsai located on the different altitudes. The first and largest lake is available on the car, while other needed hiking. There is also optional horse riding to the first lake. The third lake is tiny and surrounded by forest of spruce trees, alpine meadow. The wildlife and flora is diverse in around the lake. The elevation between lakes is 700 meters and walking distance few kilometers. You can easily take a hike to other lakes or find a cozy place to admire the beauty. Tourists can collect wild berries or fish. There is a mountain trout in the water of the lake. Furthermore, there are wild animals like Marals, mountain goats, wolves and even bears. In the evening, drive back to Saty village. Stay in a guesthouse.

Day 4: Kolsai Lakes - Kaindy Lake
Today tour will take you to another amazing lake Kaindy. In translation, it means "birch" lake. It lies above 2000 meters among the green forest of Tien Shan. The story of appearing goes back to 1911, during the earthquake the cascading happened making natural dam. Later the water coming from the mountains filled the basin and appeared Kaindy lake. Nowadasy, you can see the trunk of the trees from sunken forest.  During the day, the surface of the lake mirroring surrounding. The mesmerizing beauty of the lake is indescribable.  Enjoy picnic lunch along the lake and drive back to Saty settlement. Have free time for optional riding a horse or just wondering around the village. Night in a guesthouse.

Day 5: Kolsai Lakes - Charyn Canyon - Almaty
In the morning, depart to Almaty. On the way, make a stop at famous Charyn Canyon. It is the extraordinary monument of nature in Kazakhstan. About 12 million years ago, the natural powers like wind, rain and sun formed amazing cliffs of Charyn. The canyon's famous part is "the valley of castles" . You can take a path leading to the river or just enjoy the view on the top. According to your imagination, you can create different creations from the canyon. On the way to Almaty, you guide will tell you about the traditions and customs of Kazakh people. Arrive to Almaty and check in to hotel.

Day 6: Almaty - Nur Sultan
Today the morning flight will take you to Nur Sultan. The city tour will represent Constitution Square, where the first president of Kazakhstan N. Nazarbayev announced the changing capital city from Almaty to Astana. In the Presidential Centre of Culture of the Republic of Kazakhstan have an excursion to history and ethnography of Kazakhstan. You can also see the Golden Man, a significant archeological finding in Central Asia. After the museum, visit the largest shopping mall Khan Chatyr, the construction looks like a huge tent. Then get to the top of  "Astana-Baiterek" tower. It will open a grandiose panorama of Nu Sultan.  After having lunch at traditional restaurant, visit Kazakh Eli Square on the other site of Ishym River. Near the square, take a visit to the Palace of Peace and Accord. One of the extraordinary and stylish buildings of modern Astana. In the end of the tour, visit  the Palace of Independence. Here you can see the plans of the city together with historical background. Night in a hotel.

Day 7: Nur Sultan - Airport
Today is the last day of the tour, transfer to the airport.