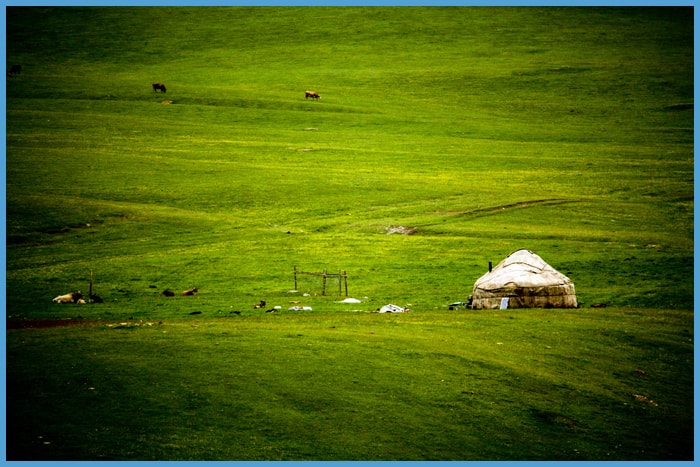 Day 1: Nur-Sultan
Your guide will welcome you at International airport of Nur Sultan. You will start you city tour from Constitution Square. Then you will move to Museum of the first President. Next stop will be at the Khan Shatyr shopping center. It is an extraordinary work of architecture. Later you take a lift to reach the top of monumental tower "Astana-Baiterek". This building has a panoramic view to the city. Later, you will go to Kazakh Eli Square on the other side of Ishym River. Nur Sultan boasts with its modern architectural monuments, one of them is the Palace of Peace and Accord. Later it is worth to see the glorious beauty of the Khazret Sultan mosque.  Today's excursion will end at the Palace of Independence, where long-term plans and history of Nur Sultan 2030  are exhibited. Stay in a hotel.

Day 2: Nur-Sultan - Ethno village - Nur-Sultan
Kazakhstan is located on the important crossroads of the East and West. That's the reason why Kazakhstan is rich in cultural diversity. The best ways to learn local culture is to experience by participating and living the life of ethno village. By taking part in culinary art and make traditional dishes in traditional methods, you will learn best recipes of national food. Moreover, there will be a master class of making traditional musical instrument of Kazakh people. It is called "Sazsyrnai". It is valuable ancient instrument of Kazakh Steppes. You will also see nomadic dwelling- yurt. It is collapsible house of nomadic tribes. The interesting fact about yurt is that it buit without any nails. The carcass is completely from wood and the coverage is from sheep wool felt. The skill of building yurt is very valuable and passed from generation to generation. Today you will see the construction of yurt. Next, you can try the Kazakh national costumes and feel like a nomad dancing national dance Kara Jorga. Later have excursion to EXPO museum (except Mondays) and visit arch of triumph "Mangilik El". Drive to hotel and have a rest.

Day 3: Nur-Sultan - Almaty
Morning flight will take you to the southern capital of Kazakhstan. Then you will take short drive to Almaty city. City tour will start from Green Bazaar, where you can find different kind of things from fresh fruits to national souvenirs. Later you will walk to central park-Panfilov, named for the honor of the soviet commander during World War II. In the middle of the park, there is a beautiful building, the Zenkov Cathedral. It is the world's most charming wooden construction. Before going to the Medeo gorge out of the town, you will explore more cultural sites of the city. Medeo Gorge on the south side of the city has the highest alpine outdoor skating rink in the world. When you come back to the city, you will climb to Kok-Tobe hill, where there is a panoramic view of whole city. Furthermore, there is a TV tower that considered to be highest in the world, if we count from the sea level. On the way back, you the city, you can take a cableway. Night in a hotel.

Day 4: Almaty - Saty - Kolsai Lake - Saty
Today you will continue your tour to Kolsai Lakes. There three lakes located in this area, one beautiful from another. Today you can have an opportunity to reach second lake by hiking. The first Kolsai lake can be easily accessible by car, that's why it is very popular destination in summer time. Here you can find any kind of activity, starting from gathering mushrooms and berries to fishing special kind of mountain trout. Altitude drop of three lakes differs about 700meters and walking distance between them are two-three kilometers. All lakes are surrounded with high spruce and lush meadow. If you find you cozy spot and lie down, you can see some Marals, mountain goats, wolves and even bears, grazing on the top of the mountains. Drive back to Saty village and overnight will be in a guesthouse.

Day 5: Kolsai - Charyn - Almaty
In the toady drive back to Almaty. En route, have a break at popular Charyn Canyon. It is an extraordinary monument of nature, even throughout the world. It is often called as a little brother of Grand Canyons in Colorado River in North America.  The famous and beautiful part is called "Valley of Casttles". The history of the canyons go to Paleogene period. The erosion of water, wind and rain formed amazing stuctures.The height of Charyn Canyon reaches to 150-300 meters. The length is about 2 km and the width 20-80 meters. There are giant castles, magical creatures and figures. According to your imagination, you can find out interesting forms. It will take hours to explore the stunning beauty of this pure museum of the nature. After magnificent creation, drive back to Almaty. Nigh in a hotel.

Day 6: Flight
In the morning, your driver will transfer you to the airport.