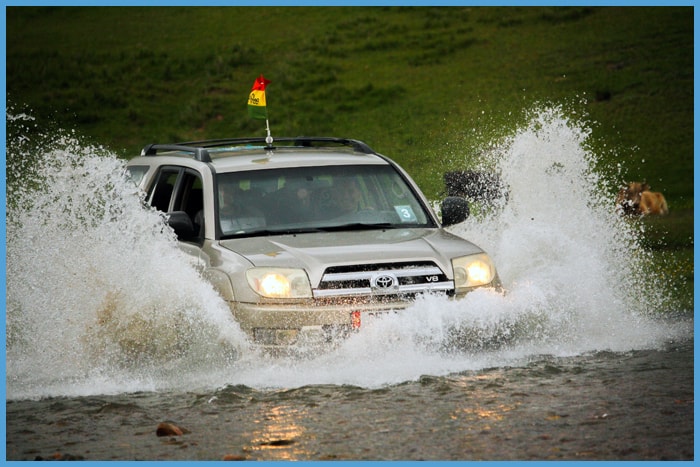 Day 1: Almaty
First, you will arrive to Almaty International Airport. Then you will drive to Almaty and embark into city tour. In the Museum of Almaty, you will learn interesting facts about the southern capital of Kazakhstan. Next will be the oldest park for the honor of 28 Panfiliv Guardsmen. The park divided into several parts, central part has amazing wooden building of Zenkov Cathedral. Then take a short walk to Green Bazaar, which is the popular place of residents for shopping.  After having lunch at local restaurant, take a short tour to famous Medeo Gorge. It is well known with high mountain skating rind and dam protecting from flood and cascading. After exploring the site, continue to a nice ski resort of Shymbulak. You will take cable car, where the is magnificent view of the landscape. Come back from Medeo and drive to Kok Tobe hill in the city. On this green hill, there are many things of interest, small zoo and observation deck of the city. on the way back, you have opportunity to ride a cable way, which leads to the center. You will spend night on night train Almaty-Taraz. .  Train #379T 20:16 - 08:11(This is subject to change.)

Day 2: Almaty - Taraz - Sairam - Shymkent
In the morning, arrive to Taraz. Transfer to the city of Taraz and have sightseeing of nice city. it will include History Museum, Karakhan and Dautbek Mausoleum, Tekturmas Historical Complex, Akyrtas ancient palace complex. The remains underneath of the current city Taraz shows that its history goes back to ancient time. After exploring, drive to Sairam(one district of Shymkent), which was one of the significant points called Ispidzhab on the Silk Road. Sairam will open you doors of Ibrahim-Ata Mausoleum, Karashash-Ana Mausoleum, and medieval minaret. Moreover, Sairam is also a motherland of Khoja Ahmed Yasawi, who was the outstanding enlightener. There mausoleums of his parents named Ibrahim- Ata and Karashash-Ana. Continue to Shymkent and check in to a hotel.

Day 3: Shymkent - Otrar Settlement - Turkestan - Shymkent
After having breakfast, have a tour to the important places of Shymkent surrounding. First drive to Otrar settlement (220 km). Here you will visit the Mausoleum of Khoja Ahmed Yasawi's teacher Arystan Bab. In addition, explore the archeological sites. Go on to Turkestan, where you will discover historical and architectural complex of "Azret-Sultan", Khoja Ahmed Yasawi Mausoleum which includes Necropolis, Hilvet underground mosque. The town Turkestan was established during 500 AD on the intersection of old trade routes connecting with Samarkand, Khiva and Bukhara. During the XVI-XVIII centuries, Turkestan was popular as spiritual and political center for Turkic World. Furthermore, it was the capital of Kazakh Khanate. Drive back to Shymkent and night in a hotel.

Day 4: Shymkent - Aksu-Zhabagly Reserve - Shymkent
Today is a day of nature in Aksu-Zhabagly Reserve. It is located about 120 km from Shymkent and the oldest natural reserve of Kazakhstan. It is found on the Western Tien-Shan Mountain Range. The elevation vary from 1000m to 4280m above sea level. The landscape differs according to the altitude: starting from semi-deserts to alpine lush meadow. You will enjoy the beauty of evergreen Tien Shan spruce and flesh smell of junipers. Especially in summer, there are different colored flowers make a carpet on the ground. Furthermore, there are representative of endemic and rare animals. They are argali and ibex, deer and roe deer, lynx and snow leopards, wolves, foxes, bears, porcupines and ermines, bearded vultures, griffons and golden eagles. After having leisure time in the reserve, drive back to Shymkent. Overnight in a hotel.

Day 5: Shymkent
Today is time to explore Shymkent city. It is located in a good location, which makes it the geographical center of Kazakhstan. Even in ancient time, one of the route of Great Silk Road crossed the city. Along with Shymkent, there were other cities like Turkestan, Syganak and Sauran. The city tour will present you an excursion to Walk of Fame (Park named after Sh. Kaldayakov), Monument "Jer Ana", Ordabasy Square, Park "20th Anniversary of Independence of the Republic of Kazakhstan", Obelisk of Glory, Eternal Fire to the Fallen in WWII. You will conclude the tour, by visiting the regional historical museum and remains of ancient citadel of Shymkent. Rest in a hotel.

Train Almaty - Taraz (4 berths per compartment) - from 40 $ per person