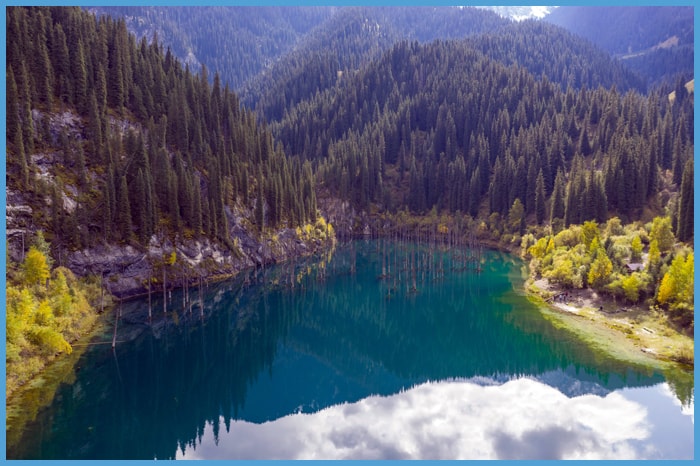 Day 1: Almaty
Upon arrival, your guide will meet you and accompany to Almaty. Almaty is the former capital and the largest city of Kazakhstan. Sightseeing begins from blooming Green Bazaar. It is the central bazaar, where you can find different kind of things. Next is central park-Panfilov, named for the honor of the division during World War II. There are many monuments in the park, dedicated for the casualties of Great Patriotic War. However, in the middle of the park, there is the most wonderful monument - Zenkov Cathedral. It is the world's most charming and tallest wooden construction. After the cultural part if the city, we will drive to Medeo gorge, where the highest alpine outdoor skating rink in the world is located. In this gorge there is also popular ski resort Shymbulak. On the way back to the city, go up to Kok-Tobe hill on the windy roads.  There is a panoramic view of whole city and observation deck. There is a TV tower that considered to be highest in the world, if we count from the sea level. Return to the city by famous Almaty cableway. You will stay in a hotel.

Day 2: Almaty - BAO - Almaty
Today is devoted for the nature, not far from the city. In the morning, drive to Big Almaty gorge. It lies on the Trans-Ili Alatau range. On the top of the gorge, there is a beautiful Big Almaty Lake, on the altitude of 2,510m. Its turquois color and calm surface often mirror celestial mountains surrounding the lake. The history of the Big Almaty Lake goes to the time of ancient glacial movement. As the source of the lake water is permanent snow, it always cold despite the hot summer. The average temperature in summertime is not above 10 degrees. The lake has important role for the city because it is a potable water. That's the reason why sometimes access is limited. There is a way going higher from Big Almaty Lake, it goes to the place, where astronomical and space researches scientific base is located (3300m). On this place, on the foothills of Big Almaty Peak you have grandiose view to the lake and other magnificent mountains around.  After having enjoyed the city drive back to city and rest in hotel.

Day 3: Almaty - Kaindy Lake
Today you will explore another beautiful Kaindy Gorge. The road to the Kaindy lake go through among the mildly spruce forest. It translated from local language Kaindy Lake means Birch lake. Kaindy Lake was formed in 1911. In the result of the strong earthquake, mountain water was blocked by cascading slide land.  The water of the lake is very cold in summer too and when the sun is out snow-capped mountains and evergreen fir trees are reflected on the surface of the water. The dried-out trunks of the trees rise above the water, as if the masts of sunken ships. This amazing landscape cannot be fully described by words. You should see on your own. After arrival, enjoy the picnic with the view of the lake. Come back to the Saty settlement and take a walk to see the village life. There is a horseback riding upon request (for extra charge).  Stay in a guesthouse.

Day 4: Kaindy Lake - Charyn Canyon - Almaty
Today visit extraordinary natural site of southern Kazakhstan - Charyn Canyons. From Saty village to canyon will take about three hours. On the way, your guide will tell you more information about history and culture of Kazakh people in this area. The lunch will be on the way at the local restaurant. Natural forces like rain, wind and the sun created these breathtaking formations of Charyn more than 12 million years ago. The most popular site is Valley of Castles, massive silhouette looks like huge ad high castles. If you go down and follow the maze track, you can imagine and see fantastic towers, sky bridges, dinosaurs and other interesting creatures. You can also enjoy the great panoramic view on the top. Drive back to Almaty and night in a hotel.

Day 5: Almaty - Nur Sultan
In the morning, take flight Nur Sultan. It is the capital city, formerly Astana. The city tour will represent Constitution Square, where the first president of Kazakhstan N. Nazarbayev announced the changing capital city from Almaty to Astana. In the Presidential Centre of Culture of the Republic of Kazakhstan have an excursion to history and ethnography of Kazakhstan. You can also see the Golden Man, a significant archeological finding in Central Asia. After the museum, visit the largest shopping mall Khan Chatyr, the construction looks like a huge tent. Then get to the top of  "Astana-Baiterek" tower. It will open a grandiose panorama of Nu Sultan.  After having lunch at traditional restaurant, visit Kazakh Eli Square on the other site of Ishym River. Near the square, take a visit to the Palace of Peace and Accord. One of the extraordinary and stylish buildings of modern Astana. In the end of the tour, visit the Palace of Independence. Here you can see the plans of the city for long period, there is also historical information about the city development. Night in a hotel.

Day 6: Nur Sultan - Airport
After having breakfast at the hotel, transfer to airport.