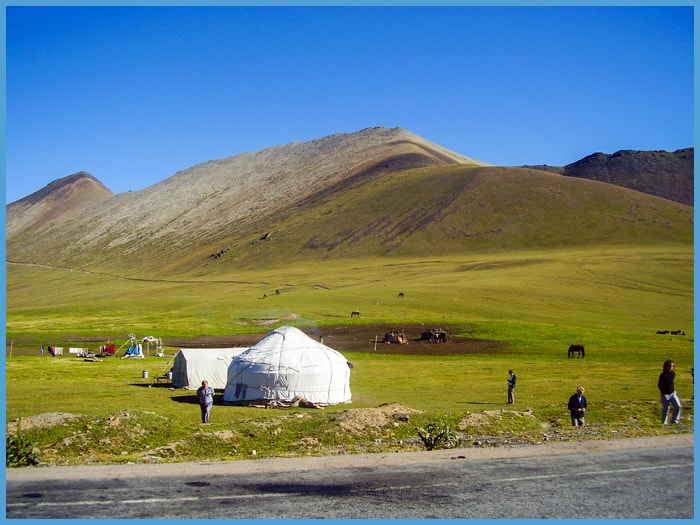 Day 1: Osh
Today you will land to Osh and your driver will welcome you at the airport. Osh is the southern capital and second largest city of the country. Embark to city tour by hiking to the holy Suleiman Mountain.  Suleiman Too is famous as a Solomon's Mountains. According to the legend, the body of the Suleiman Prophet was buried at the foothills of this mountain. Nowadays Suleiman Mountain is a popular place of worship for Muslims. Later you will explore the colorful Asian Bazaar. You will definitely have bright pictures here. Night in a hotel.

Day 2: Osh - Abshir Ata - Osh
In the morning start your day-tour beautiful Abshir Ata Gorge. In this beautiful gorge, you will explore two places, a waterfall, which is believed to be holy, because it comes out from the rock. Another site is alpine lake. The road going to the lake will be magnificent and you will have many photos. Have a picnic with the view of lake. Drive to Osh and have traditional dinner at local restaurant. Night in a hotel.

Day 3: Osh - Bishkek
Today continue tour to capital of Kyrgyzstan. Morning flight will take to Bishkek city. After arrival, start you interesting city tour. It will show you the main sites like Pobeda Square, which is dedicated for the honor of victory over fascist Germany. Walk to Oak Park and main square Ala Too. On the way to Old Square, explore Museum of Fine art of Bishkek. Here you can discover many interesting facts about country. In the end of the tour, drive to Osh Bazaar, the oriental Asian Bazaar, where you will enjoy seeing locals bargaining. Traditional dinner at the restaurant and night in a city hotel.

Day 4: Bishkek - Burana - Issyk Kul northern shore
Start you day early. You driver and guide will pick up you at 8 o'clock in the morning. Today you will head to Issyk Kull lake, which is the largest lake of Kyrgyzstan, located at the altitude of 1607 meters above sea level. It is the second biggest alpine lake in the world, after Titicaca. The water of the lake is transparent and its source is mountain rivers coming from glaciers. On the way, have a break at the Burana Tower. It represents the remains of old city Balasagun in the 10-11th century. There are also collection of unique monuments called Balbals. Night will be at the hotel near the lake.

Day 5: Issyk Kul lake - Son Kul lake
In the morning, tour goes to the second biggest lake of Kyrgyzstan, Son Kul Lake, located at the altitude of 3016 m. En route, stop at the big natural exhibition of petroglyphs. Cholpon Ata rock paintings represent more than 2000 examples dating back to 800 BC. Son Kul has amazing nature with alpine lush meadow and calming atmosphere. Moreover, you will have a chance to meet local people living in traditional tents called yurts. In summertime, shepherd use this place as a pasture. Magic sunset, magnificent view will remain in your memory forever. Night in nomadic yurts.

Day 6: Son Kul Lake - 33 parrots - Bishkek
After enjoying breakfast, drive to Kochkor village via beautiful mountain road. On the way, stop at the pass called 33 parrots. The name derives from 33 repeatedly serpentine road. The height reaches 3 133 meters. In Kochkor, meet local craft woman showing you the methods of making traditional carpets. Felt carpets made of sheep wool is the main heritage of traditional applied and decorative art. After learning, you can make your own carpet and have a look to local shop of crafts and museum of old things. Go on to Bishkek and night at the hotel.

Day 7: Airport
Today is the last day in Kyrgyzstan. Transfer to airport.