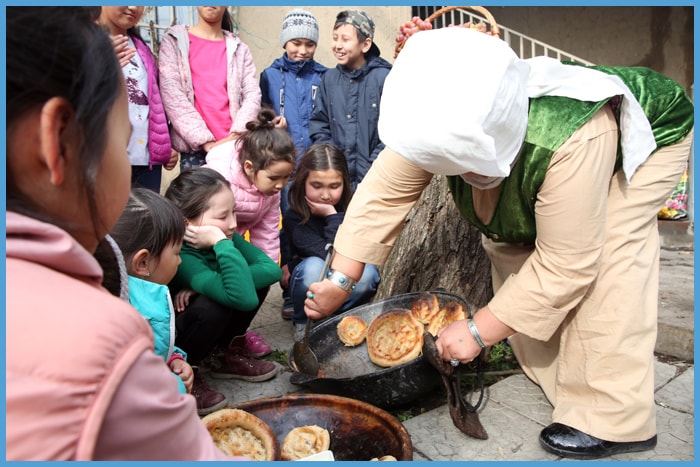 Day 1: Osh
You will be met by your driver at the airport. Then drive to the city of Osh located in the Fergana valley. The main attraction of the city is Suleiman Mountain, which is known as Solomon Mountain. According to the local legend, the Prophet Solomon was buried on this mountain. The Suleiman Mountain is in the center of the city, by climbing you will have good view of the city. Afternoon, get lost in vibrant Asian Bazaar. Night will be at the restaurant.

Day 2: Osh - Bishkek
Morning flight will take to Bishkek city. After arrival, start you interesting city tour. It will show you the main sites like Pobeda Square, which is dedicated for the honor of victory over fascist Germany. Walk to Oak Park and main square Ala Too. On the way to Old Square, explore Museum of Fine art of Bishkek. Here you can discover many interesting items of Kyrgyz art. In the end of the tour, drive to Osh Bazaar, the oriental Asian Bazaar, where you will enjoy seeing locals bargaining and offering their goods. Traditional dinner at the restaurant and night in a city hotel.

Day 3: Bishkek - Burana - Issyk Kul northern shore
You driver and guide will pick up you at 8 o'clock in the morning. Today discover  Issyk Kull lake, which is the largest lake of Kyrgyzstan, located at the altitude of 1607 meters above sea level. It is the second biggest alpine lake in the world, after Titicaca. The water of the lake is transparent and its source is mountain rivers coming from glaciers. On the way, have a break at the Burana Tower. It represents the remains of old city Balasagun in the 10-11th century. There are also collection of unique monuments called Balbals. Night will be at the hotel near the lake.

Day 4: Issyk Kul lake - Tash Rabat
In the morning, go on to Caravanserai Tash Rabat. On the way, you will visit the Open Air Museum of Petroglyphs in Cholpon Ata. It is the rock paintings carved more than 2000 years ago by shamans. This natural site on the foothills of mountain will be exciting. Tash Rabat islocated at the altitude of 3200 meters and was ancient caravanserai on the Silk Road. It was built in 14th century. The construction was completely from stones and one side goes into mountain. There are more than 30 rooms were found. The interesting fact is that there are some prison cells for keeping thieves. Have dinner and sleep in a yurt.

Day 5: Tash Rabat - Son Kul
Today tour goes to another amazing lake Son Kul. It is one of the alpine lakes located on the 3016 meters above sea level. The magical atmosphere makes you forget about the problems and takes you to the land of nomads. The surrounding of the lake is used as a summer pasture. After check in to the yurt camp, have entire afternoon enjoying the unique nature. Dinner and night in yurts.

Day 6: Son Kul Lake - 33 parrots - Bishkek
After breakfast, drive back to Bishkek via Kochkor village. On the way, have a break on the top of the 33 parrot pass reaching 3 133 meters. Kochkor is famous for its traditional carpets. The local family of craft women will show you how to make them and tell many interesting facts about decorative art. You have an opportunity to participate in the process. Later have a look to local souvenir shop and small museum. Drive to Bishkek through beautiful Boom Gorge.