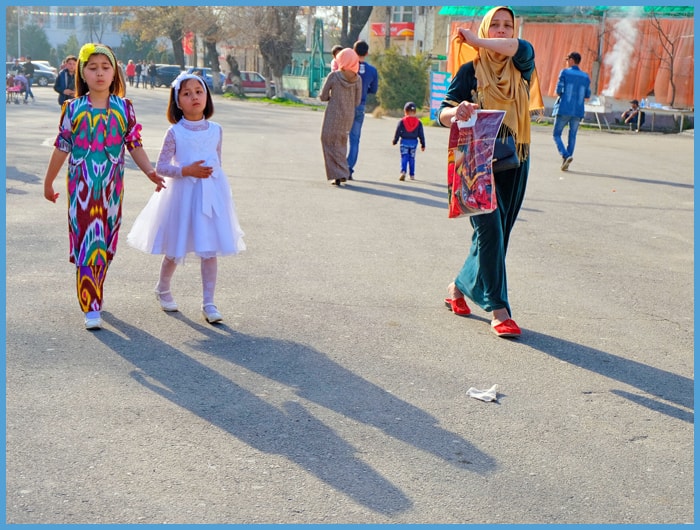 Day 1: Tashkent
In Tashkent, you will first visit Independent Square. It was constructed for the honor of victory over fascist Germany in World War II. Then enjoy the walk on the main Broadway, connecting Independent Square with Amir Timur Square. Have a ride on outstanding Tashkent subway, built during the Soviet time in 1977. Metro of Tashkent is one of the beautiful in the world. The secon half of the day will be dedicated to the old part of the city. They will be Chorsu Bazaar, Kukaldash Madrasah and Complex of Hast Imam. There are some madrasahs, mosques and mausoleums. There is also most valuable artefact- Othman Quran, the oldest copy of Quran in the world. It was owned by the Othman Ibn Affan during the 8th century. He was the Third Caliph of Prophet Muhammad. In 8th century, when his enemy killed him, blood has spread on the book. Nowadays bloodstains can be seen on the paper of the book. Overnight in a hotel.

Day 2: Tashkent - Samarkand (350 km, 4 hrs drive)
In the morning, drive to the second largest city Samarkand. It is considered to be the old city like Babylon and Rome.  Samarkand situated in the picturesque river valley Zarefshan. The sightseeing will present the most beautiful places of Samarkand. First is Registan Square with three amazing madrasahs. The charm of the buildings will surprise you most. The history of these beauties goes back to 15th-17th century. Next is Shakhi-Zindeh complex including large collection of mausoleums built in 11th-15th century. It is listed on the UNESCO World Heritage. In the end, Bibi Khanum Mosque will open its beauty. It was built by great conqueror Tamerlane for his favorite wife. Night in a hotel.

Day 3: Samarkand - Yurts camp of Nurata (310 km, 4 hours)
Today an exciting tour is awaiting for you. Transfer to Nurata town, on the slopes of Nuratau Mountains. The establishment of the town goes back to 4th century BC. According to the locals, it was a fort called Nur, constructed by Alexander the Great. Nevertheless, the archeological artefacts found here say that history goes to 40 thousand years ago. In Nurata, city tour will include the Khasan- Khuseyn Mosque, blacksmith's and potter's workshops, holy pond with sacred fishes, pilgrimage of Muslim worshipers. Moreover, there are other sites like Medressa of Sheihun Hasan Nury, Namazgokh Mosque and "Alexander the Great's Fortress" ruins. After excursion, continue to yurt camp in desert and have night there.

Day 4: Nurata - Samarkand
After breakfast at the camp, have free time for camel ride to Aydarkul Lake. Its length to 250 km along the desert. Have fresh fish for lunch and swim in warm and salty water. You can also have sunbath. Afternoon, drive to Samarkand. On the way, there is an interesting site of rock paintings- Sariamish. There are more than 3000 petroglyphs were found here. Most of them have animals, people, hunting scene, lifestyle and even lovemaking. Arrive to city and rest in a hotel.

Day 5: Samarkand - Tashkent (350 km, 4.5 hrs)
In the morning, drive to capital of Uzbekistan.  Discover the rest of sightseeing visiting Courage Monument. It is a memorial complex, constructed as a symbol of the elimination of the consequences of the Tashkent earthquake. Later Zangi Ota memorial complex, in accordance to the local legend, Zangi-Oota was a herder and was popular by his wisdom and good deeds. Today's tour will be concluded by the State Museum of Applied Arts of Uzbekistan. Here you can see old national clothing, hand and machine embroidery, skullcaps and national fabrics, carpets, woodcarving and many other cultural items. Nigh in a hotel.

Day 6: Tashkent - Flight
In the morning, transfer to airport according to flight schedule.

Tour does not include:
- Visa
- Full board
- Travel insurance
- English speaking guide
- Entrances to all museums
- Train tickets - 60$ Tashkent-Samarkand-Tashkent