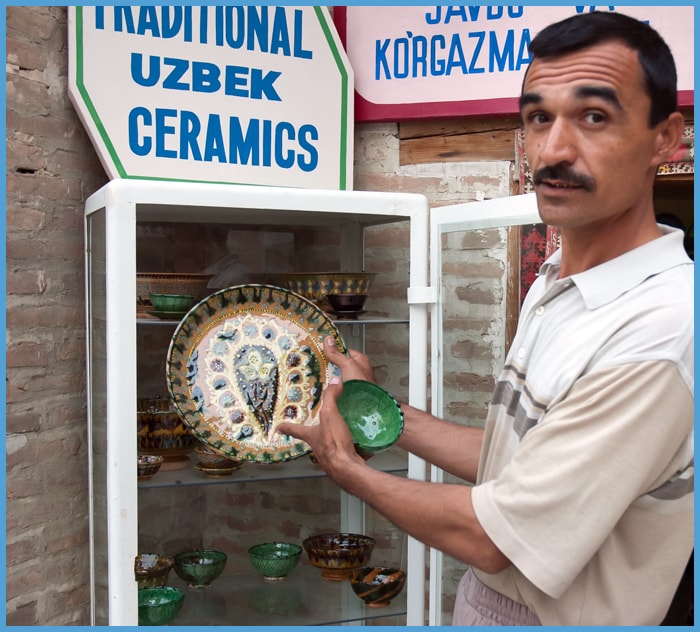 Day 1: Tashkent
City tour in Tashkent will start Independent Square, which was constructed for the honor of the victory over fascism during World War II. A walk on the main Broadway to the Square of Amir Timur will show you real life of the city. Later you will have a chance to travel on the Tashkent subway, which is considered to be one of the beautiful metros in the world. It has been serving to city residents since 1977. Next remarkable places are Chorsu Bazaar, Kukaldash Madrasah and Hast Imam complex, which includes many madrasahs, mosques and mausoleum. The most important site of the day is Othman Quran, the oldest copy of the holy Quran dating back to 8th century. The owner of the book was Othman Ibn Affan, one of the four Caliphs succeeded prophed Muhammad. He was murdered by non-muslim community. Nowaday, you can see his blood stains spread on the paper of the book. Night in a hotel.

Day 2: Tashkent - Samarkand (350 km, 4 hrs drive)
In the morning, drive to the second largest city Samarkand. It is considered to be the old city like Babylon and Rome.  Samarkand situated in the picturesque river valley Zarefshan. The sightseeing will present the most beautiful places of Samarkand. First is Registan Square with three amazing madrasahs. The charm of the buildings will surprise you most. The history of these beauties goes back to 15th-17th century. Next is Shakhi-Zindeh complex including large collection of mausoleums built in 11th-15th century. It is listed on the UNESCO World Heritage site. In the and Bibi Khanum Mosque will open its beauty. It was built by great conqueror Tamerlane. And dedicated to his favorite wife. Night in a hotel.

Day 3: Samarkand - Urgut - Samarkand
Today is devoted to surrounding of Samarkand. First, visit Urgut village, where the vibrant is and colorful bazaar is waiting for you. It is interestion to see locals trading. Afternoon, visit to Al Bukhary Complex. Al Bukhary was one of the scholars, who wrote interesting and important books like Al-Adab al-Mufrad. The most significant was the authentic collection of Hadith. Drive back to Samarkand. Overnight in a hotel.

Day 4: Samarkand - Gijduvan - Bukhara
Your tour in Uzbekistan continue to Bukhara. On the way, take a break at Gijduvan settlement. It is outstanding for its Gijduvan ceramic school. There is private pottery workshop, whose history goes back to long time ago. The skill of making ceramic is valuable and cherished from generation to generation. Nowadays Gujduvan is popular with sixth generation of potters. It is the family of Narzullayevs. The family made Gijduvan ceramic worldwide. The Gijduvan ceramics have interesting geometric ornaments and green, blue colors predominant in design. Continue to Bukhara and have rest in hotel.

Day 5: Bukhara
In the morning start exploring Bukhara. Bukara offers many places to discover. City tour will start from Citadel Ark. It was a palace of Bukhara Empire and foundation goes to 4th century. Later visit Samanids Mausoleum. It is perfect example of the architecture of 9th-10th century. The Chashma Ayub in other words Job's well will be next attraction together with Bolo Hauz Mosque. Bolo-Huaz also known as a mosque of forty columns. It was constructed for the honor of city head Abu-Fayud Khan. Find yourself in the street of shopping domes. Later visit the outstanding madrasah of Bukhara. It is Nodir Divan Begi under the Lyabi House Ensemble, which is popular attraction of Bukhara. Finish your tour at Poi Kalon Complex, which is beautiful architectural monuments of 12th-16th century. There three parts, Kalon Mosque, Kalon Minaret and Mir Arab Madrasah. Night in a hotel.

Day 6: Bukhara - Khiva (440 km, 7 hours)
The tour goes to another mysterious city Khiva. It is the oldest city of Uzbekistan taking you to ancient time. Its development and history closely related to outstanding Khorezmshah's State, whose previous capital was Urgench. According to 10th century notes, Khiva was important center on the trade way like Silk Road. It served as stopover for caravans from Chine and to. Day and night, the long chain of camels passed through the city Khiva. Nowadays, city has many historical and architectural monuments to protect and preserve to next generation. On the way, you will drive via famous Kizilkum desert. You will also see Amu Darya River, the deepest river in Central Asia. It takes its beginning from Panj and Vakhsh Rivers and goes to Aral Sea. Enjoy leisure time in Khiva and rest in a hotel.

Day 7: Khiva
In Khiva, you will feel like in Medieval Ages. The oldest part of city is Ichan-Qala. It is in the center and rounded by high clay walls. In the boundaries of Ishan-Qala, there are old sound buildings, palaces, mosques, Madrasahs, Mausoleums, Minarets, Caravanserais, Bathhouses and many other interesting monuments. About 400 traditional houses and 60 architectural monuments comprise Ichan-Qala and make it real city museum. Since 1969, the territory of Ichan-Qala was announced as historical and architectural protected area. One of the significant sites is the Kunya-Ark fortress dating back to 17th century. It was established by Muhammad Arang Khan. There is also perfect examples of Khorezm architecture during 1830s. They are Kalta Minaret and Tash Khouvli Palace. Overnight in a hotel.

Day 8: Khiva -Tuprak Qala - Ayaz Qala - Urgench - Tashkent
In the morning, start driving to Nukus city, the capital of Karakalpakstan Republic. It is situated close to Aral Sea on the north of Uzbekistan and rounded by three deserts: Kara Kum, Kizil Kum and Ustyurt. En route, there are remains of famous ancient civilization like Ayaz Qala and Turpak Qala. First, Ayaz Qala was a palace of Khorezm State. It was called for the honor of brave warrior in Turkic folk- Ayaz. The history of the Ayaz Qala goes back to II century BC. The other is Turpak Qala, in translation clay fort. It served as a city of Khorezmian ruler Artav. According to Archeological researches, it was built in I-II century AD. A lot of wars and conflicts destroyed the cities and left few remains. Stay in a yurt camp near the Ayaz Kul Lake. Enjoy dinner near the fire and ride a camel (optional).

Day 9: Tashkent - Flight
Today is last day of the tour, transfer to airport.