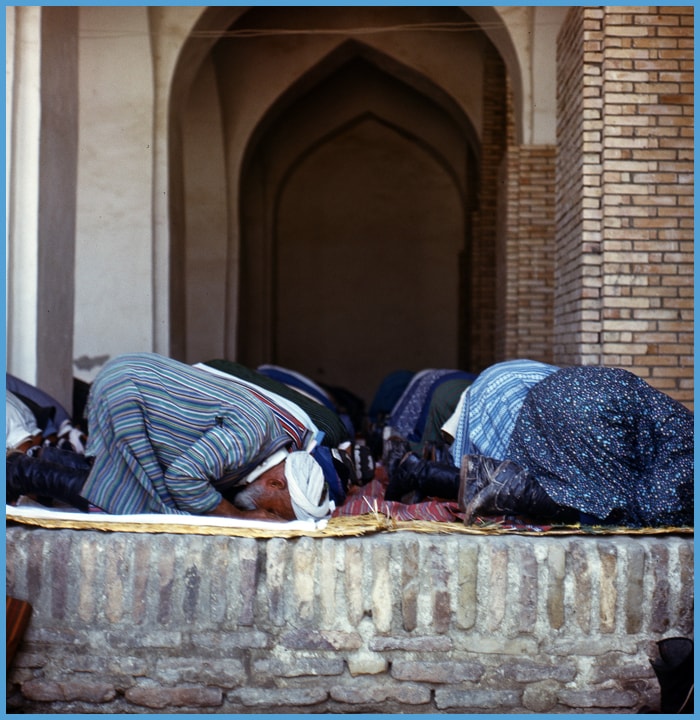 Day 1: Tashkent - Nukus
You will take morning flight to Nukus. After arrival, an exciting tour will start in Nukus. Museum of Savitsky, where the prohibited works of art is one of the main sightseeing. This museum hosts 20th century masterpieces of avant-garde paintings of Sokolov, Komarovskiy and Amaravella group. All the banned work was gathered by the coordinator of Karakalpakstan state during 1960s. Some of the forbidden works from soviet artists he bought, some he managed to get free. During that period, he perfectly save them and finally could exhibit then in the museum in Nukus. Following the excursion, you will drive to Mizdakhan necropolis outside of the city. According to the archeological researches, it was a city during 4th century BC and 14th century AD. There is also 2200 years-old Zoroastrian monument called Chilpyk. Night in a hotel.

Day 3: Nukus - Ayaz Qala - Tuprak Qala - Khiva
In the morning, we will travel to Khiva.  It is the oldest city offering beautiful sites of the history. The development of Khiva closely related with the Khorezmshah's State, whose capital was Urgench near Khiva. According to the historical evidence, Khiva was the most developed town along the Great Silk Road. In the 10th century resources, it was mentioned that almost all traders from East to West stopped over Khiva. From dawn to dusk the city's door were open to caravans. On the way, you will visit remains of ancient cities: Ayaz Qala and Turpak Qala. Ayaz Qala served as a fortress during Khorezm State, was built in II century AD. According to old folklore, it was named for the honor of brave slave warrior Ayaz. Another fortress Tuprak Qala was established in I or II century AD and was kept until 6th century. The name Tuprak means clay fort, in ancient time it was a palace of Khorezmian leader. Continuous conquering and wars over centuries destroyed the forts. Arrive to Khiva and stay in a hotel.

Day 3: Khiva - Bukhara
Early in the morning, we will drive to city of Bukhara. Bukhara is a town museum with more than 140 architectural heritages of Middle Ages. The history of the town left different monuments of different epoch. The city is full of narrow streets, beautiful parks and gardens. On the way to Bukhara, you will drive through the sand dunes of Kizilkum deserts. You will also be able to see the deepest Central Asian River-Amu Darya. It is the joint of Panj  and Vakhsh river, started in Tajikistan's territory. It is one of the tributaries of Aral Sea. After our arrival, have free time to relax. Night in a hotel.

Day 4: Bukhara
Today will be enjoyable tour of Bukhara city. The first site is oldest citadel of Bukhara - Citadel Ark dating back to 4th century. Many Bukhara Emirate dynasties used this place as a residence. The next will be masterpiece of 9th-10th century architecture -Samanids mausoleum. Then tour will continue to the Chashma Ayub (Spring od Job) and Bolo-Hauz mosque, also famous as a mosque of 40 columns built for the memory of the city's governor Abu-Fayud Khan. Later, you explore authentic shopping domes and outstanding madrasahs like Nodir Divan Begi under the Lyabi House Ensemble, the remarkable site of Bukhara. Poi Kalon complex consist of three constructions will end your city the tour. There are Kalon minaret, Kalon mosque and Mir Arab Madrasah, the extraordinary forms of artwork dating back to 12th-16th centuries.  Night is in a hotel.

Day 5: Bukhara
This day will be dedicated to travel to the outskirts of Bukhara city. First you will drive about 20munites to get Bahauddin Naqshbandi complex. It is a memorial complex of famous Sufi Leader and Philosopher Sheikh Bakhauddin Nakshbandi. Due to this place serves as a pilgrim place for Muslim community from different parts of the world. Furthermore, Bakhauddin Nakshbandi was one of the respectable advisors of Amir Timur. Nowadays, this complex includes mosques of Kushbegi and Muzafarohana, garden with pool, madrasah, and burial places of Bukhara rulers and Dakhma upon the tomb of Bakhauddin Nakshbandi himself. Next you will drive to see royal house of Bukhara Emirs, Sitora Mohi Hosa complex. Here you can see differen styles of architecture. The name of the place is addressing the early death of Emir's wife, Sitorai Mohi Hosa means young "Star - like and moon- like Palace". The last stop going to be Chor Bakr memorial complex at the Sumiton village. Style of the complex reminds the four sides of the universe and means the equality of human beings. Night in a hotel in Bukhara.

Day 6: Bukhara - Gijduvan - Samarkand
In the morning, you will move to Samarkand. En route, you will visit the outstanding private pottery workshop. It is located at the Gijduvan village. This ceramic school has its long history. Valuable skill of working with ceramics passed from ancestors to sons. Nowadays, Gijduvan is famous for its six-generation of potters from family of Narzullayevs, this fact makes it worldly known. The uniqueness of Gijduvan ceramic school are geometric ornaments and green, blue colors, used in creating a design. Continue driving to Samarkand and stay in a hotel.

Day 7: Samarkand
Magical city Samarkand is located in the Zerafshan river valley and known as the second biggest city in whole Uzbekistan. It is one of the oldest cities, coeval with Babylon and Rome. Sightseeing covers famous Registan square, stunning Shakhi-Zindeh, Guri Emir Mausoleum and Bibi Khanum Mosque. The first visit must be to Registan square. It charms millions of people with its unique beauty. Three beautiful Madrasah buildings rounding the square are the masterpieces of 15-17th centuries. Another architectural complex is the heritage of UNESCO - Shakhi-Zindeh, dating back to 11th-15th centuries. It represents the largest assemble of mausoleums. The last site is Bibi Khanum Mosque, constructed for the honor of Tamerlane's wife, following his victorious conquer to India. Overnight is in a hotel.

Day 8: Samarkand - Tashkent (transfer or train)
Morning train will take you to capital city Tashkent. Upon arrival, you will start full day interesting city tour. Central Square of the city is Independent Square, constructed for the memory of the victory over the fascist Germany during the Second World War. Later, you will go through the local Broadway, which leads to Amir Timur Square. Then you will have sightseeing in the ancient part of the city: blooming Chorsu Bazaar, old Kukaldash Madrasah and famous Has Imam complex consist of many madrasah, mosques and mausoleum. The remarkable exhibit of the complex is the world's oldest Quran copy - Othman Quran, dating back to 8th century. This valuable heritage belonged to Othman Ibn Affan, who came after the prophet Muhammad. Later he was assassinated by non-muslims in 8th c. Today it is possible to see his blood stains on the Quran. Night will be at the hotel.

Day 9: Flight
In the morning, drive to airport according to flight schedule.